Baofengs seem like a good choice for inexpensive APRS etc. However I’ve always run into an issue which I’ve never found a solution for – the rig keys up, but doesn’t unkey again. Not much good.

I just came across this page, which claims to solve it. Summary: put a 2.2k resistor in series with the PTT line.

No explanation given as to why that fixes it. I will try this out… 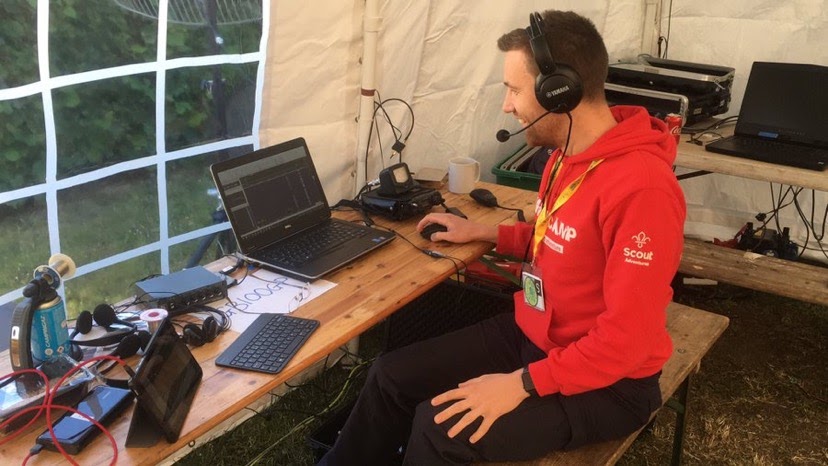 You’ve likely heard of QO-100, or Es’hail 2. It’s the first geostationary satellite carring an amateur radio payload. Geostationary means it’s always in the same place in the sky, so no waving yagis about, and the amateur radio payload is a pair of transponders. One narrowband, which I’m targeting, and one wideband, which is good for DATV, but requires more kit and more TX power than I have.

QO-100 has clearly been designed to be straightforward for amateurs to work. Both the uplink and the downlink are in amateur bands, the uplink is adjacant to the 2.4GHz Wi-Fi / ISM band, so there is loads of gear floating around already for this, e.g. high gain antennas, and the downlink is right next to the frequencies used for commercial satellite TV, around 10-11GHz, meaning regular satellite TV dishes and LNBs can be used to receive the downlink on inexpensive receivers or general coverage scanners / amateur radio transceivers. More on equipment later…

The traffic typically seen on QO-100 is a mixture of SSB – in the top half of the passband – and mixed digital modes / CW in the bottom half. SSB seems to be most popular, and despite the distance, a couple of watts into a reasonable antenna is more than enough to get in comfortably and reliably.

When I read about QO-100, I knew I had to get a setup together. So I did my research and started buying parts. Fundamentally, my setup is:

* NB this company pulled a fast one, jacking up the price of that antenna significantly just before the well known RadCom article landed on doormats. Not cool.

Both the transverter and the LNB need power. Both take power up the coax. This needs to be injected via a pair of bias Ts. A bias T can be used to either inject DC into the near end of a coax cable while keeping it out of a radio, or to extract DC from the far end of a coax cable to power something. The LNB would ordinarily be powered by a Sky TV box using an internal bias T, but in the absence of that, we have to provide one.

* the laptop and SDR can be swapped out with any receiver that can cover 739 – 740MHz upper side band.

Choose whether to start with Transmit or Receive.

Operating on QO-100 is much like any other non-inverting linear transponder. Before you transmit, make sure you can see signals in the receive passband. An SDR waterfall display is highly recommended. You transmit using low power on 70cm using SSB into the transverter, the transverter converts that to 2.4GHz, and up it goes to the satellite. This comes back down at the 2.4GHz frequency plus 8089.5MHz, so you need to find yourself on the downlink, since that’s where anyone responding to you will be transmitting.

I wrote a little bit of software that syncs the VFO of my physical radio with the VFO of SDR Console. It’s a bit basic still, but is here anyway. Makes keeping your uplink and downlink syncronised, and fine tuning, pretty easy. Supports CLAR on the Yaesu radio too, which is pretty neat.

Frequency table
Here are the frequencies of the signals at each of the stages through the whole setup. Each frequency is the lower edge of that section.

The LNB drifts significantly with temperature. To correct for this, you can modify the LNB, or more easily, you can correct for it in software. Setting up SDR Console for QO-100 is covered here.

If you transmit too loud a siren will sound on top of your downlinked signal. Back off the power if this happens. Do not transmit FM up to the satellite.

To date I’ve worked from South Africa to Iceland, Brazil to Thailand all using 2W into my Wi-Fi dish using SSB, with good reports.

I’ve tried a little bit of FreeDV (narrowband digital voice for HF), decoding myself via the WebSDR on a second laptop, which worked surprisingly well even in the face of my basic equipment with no GPS-disciplined LO. This was a bit of a surprise.

I tried a bit of SSTV just for giggles. Nearly fell off my chair when someone responded. I had technical challenges with the receive audio so I never found out who it was. But again I was able to decode myself on the WebSDR on a second laptop. This mode seems very susceptible to timing mishaps due to drift.

The experience is like HF, but with some added challenges (resulting in learning opportunities), minus the uncertainty of propagation. This is my first foray into anything above 70cm, and it’s been great fun.

Now I have a working “reference” setup based largely on commercial parts, my plan is to experiment with different dishes, feed points etc so I have something known good to compare against. I also want to experiment further with digital voice, and try out maybe some 300 baud packet and maybe some weak signal PSK stuff.

FT-450D firmware version 0244 (hold down Mode while powering on)

This week I put together a simple delta loop antenna for 6m. This is a simple, cheap, lightweight horizontally polarised somewhat-directional antenna. Fantastic for the sporadic E season which is going on right now – especially in a confined space where a beam isn’t practical. 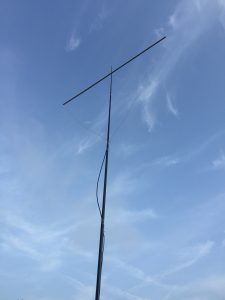 It is hung on a SOTABEAMS fibreglass pole, about 6m above ground level in my case. No guys, just strapped to the washing line with velcro.

Almost immediately after plugging it in, I decoded PV8DX in Brazil on FT8. That was exciting! Even if it was a fluke. Since then I have worked Italy on SSB, and Malta, Estonia, Spain, Italy, Sardinia on FT8. Right now I’m +8dB into Sardinia, so this thing gets out okay!

A quick test on a web SDR shows a 9dB difference between broadside and end-on, so it’s reasonably directional.

A word on matching. A delta loop has a nominal impedence of 100 ohms. To match to 50 ohm coax, this design uses a simple piece of 75 ohm coax as an impedence transformer. This works by taking advantage of the mismatch between 50 and 75 ohm coax. For 6m, a 99cm length is necessary. No other matching or choking seems to be required for this antenna, so it should be fairly low-loss.

Finding the perfect length of wire for resonance will depend on the accuracy and quality of the 75 ohm section, and on the velocity factor of the antenna wire, which can vary. The maths predicts that resonance at 50.313MHz should be 5.963m of wire, so 5.985m (22mm difference) is damn close.

I quite fancy making 2m and 4m versions of this. The following table shows scaled measurements for 2m and 4m, based on this successful implementation for 6m.

Here’s where I’ve been heard over a few hours this evening: 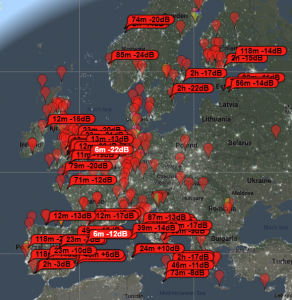 and these are the stations we’ve heard this evening: 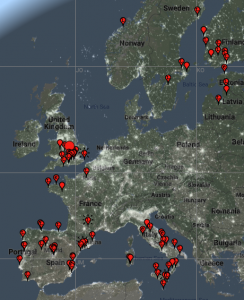 If you make one of these, let me know how you get on!

I just compiled a non-abbreviated list of callsign prefixes and country names, including non-ITU allocated prefixes.

Data source is Wikipedia plus a whole bunch of post-processing work by me. It should therefore be up to date as of now.

Might be useful to people writing ham radio applications in future, e.g. me.

Should you use it, it would be nice but not necessary if you credited me, but please do credit Wikipedia.

With Exercise Blue Ham coming up again this weekend, I thought now would be a good time to put out a list of the suggested 60m spot frequencies for CHIRP, noting that the 60m band is not continuous.

You should be able to easily import this file into your compatible radio to avoid fiddling with manually programming the channels. Use of the channels rather than the VFO will guarantee you don’t operate out-of-band.

This is going to be useful!

Took me a while to get this service manual downloaded, so mirroring it here myself.

Since information on my old Yaesu FT-470 handheld is starting to become hard to come by, I thought I’d start a post where I put stuff I need to remember or often look up about it.

There won’t be much here to start with, but it might well grow over time.

This is shared in common with these radios:

They sell such a cable here.

The pin centres are NOT the smaller 8mm apart from each other – more like 9.5 to 10mm.

I find the connectors to be too loose to use separate 3.5mm and 2.5mm jacks – it is not a reliable connection.

The manual is here.

The microphone is a 2-kilohm condenser.

or the transformer method, which I’ve never tried.

Headset / speaker mic wiring – unverified – need to tear apart a headset I have somewhere to check.

Again, that is unverified.

Any speaker mic must be a design where the PTT switch is double poled, where the second pole interrupts the speaker connection, else audio feedback happens on TX.